By entering this website, you affirm that you are of legal drinking age in the country where this site is being accessed.

The earthiness of the mushrooms and saltiness of the cheese perfectly complement the acidity and fruitiness of LaLuca Prosecco DOC Treviso. 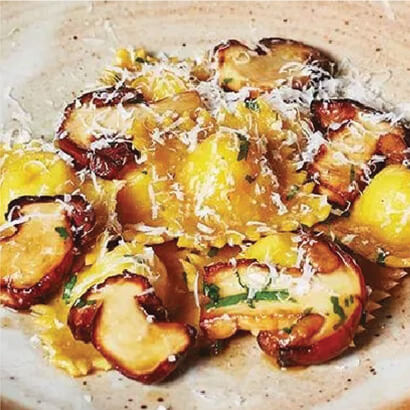 1. Make the dough: In a medium bowl, stir the flours and salt to combine. On a clean work surface, mound the flour. Create a deep well in the center and add the eggs and oil. Using a fork, beat the eggs and oil. Starting from the interior wall of the well, gradually incorporate the flour into the wet ingredients as if scrambling eggs, until a thick batter-like consistency forms. Use a bowl scraper to cut and fold the remaining flour into the center until a shaggy mass forms; press to form a dough.

2. With clean dry hands, move the dough and any remaining scraps to a clean work surface. Sift flour lightly over the board, then knead the dough until semi-smooth, about 3 minutes. Scrape the work surface of dried flakes and continue to knead dough until it is smooth and supple and springs back when poked, and most or all of the flour is incorporated, 15 minutes more. (If dough is dry and tight, wrap in plastic and let rest 5–10 minutes before continuing to knead.) Wrap the ball tightly in plastic; refrigerate 1 hour or ideally 1 day.

3. Make the filling: In a large pot, add the potatoes and enough water to cover; salt generously and bring to a boil over high heat. Lower to a strong simmer, then cook until the potatoes are tender, 25–30 minutes. Strain and let cool, then peel and discard the skins.

4. Set a mesh sieve over a medium bowl. Using a spatula, press the potatoes through to make a smooth, fluffy purée. Add the cheese, egg, and salt; mix until smooth. Pack the mixture into a piping bag fitted with a round tip, and refrigerate until ready to use, up to 3 days.

5. Shape the tortelli: On a very lightly floured surface using a mattarello or rolling pin, roll out the dough as thinly as possible into a circle at least 22 inches in diameter. Imagine a line going parallel to the edge of the work surface across the dough’s center. Starting ¾ inch below that line and 1¼ inches from the left edge of the dough, pipe scant 1 teaspoon balls of the filling every 1½ inches in straight lines horizontally across the dough. Continue to pipe parallel lines of filling balls across the bottom half, leaving at least 1 inch vertically between balls. Once half of the dough is covered with filling, pick up the clean half and fold to cover the filled side (be sure the edges line up and you leave around a ½-inch border beneath the bottommost line of filling). Move from one filling dot to the next, pressing the dough around the filling firmly to seal and remove air bubbles. Using a taglia ravioli (festooned pasta wheel), cut between the lines of filling to create around thirty-eight 1½-inch squares; separate them gently.

6. Bring a large pot of salted water to boil. Meanwhile, make the sauce: In a large skillet over medium-high heat, add the oil. Once smoking, add the porcini. Cook, without stirring, until browned, 60–90 seconds. Stir in the butter and cook, stirring occasionally, until the foam subsides and the milk solids begin to brown, 2–3 minutes. Stir in the crushed garlic and rosemary or thyme and cook until fragrant, 30 seconds. Add the parsley and white wine, and continue cooking until the wine has almost completely reduced, 60–90 seconds. Add the stock, bring to a boil, then reduce to medium-low. Cook until the sauce has thickened to a glaze, 1–2 minutes. Remove and set next to the pot of boiling water.

7. Add the tortelli to the boiling water and stir immediately; cook until the pasta floats and is al dente, 1½–2 minutes. Using a spider or slotted spoon, remove the tortelli to the skillet with the sauce; toss gently, adding 1–2 tablespoons of the pasta cooking water as needed to loosen the sauce, until well coated. Top with pecorino to taste and serve.